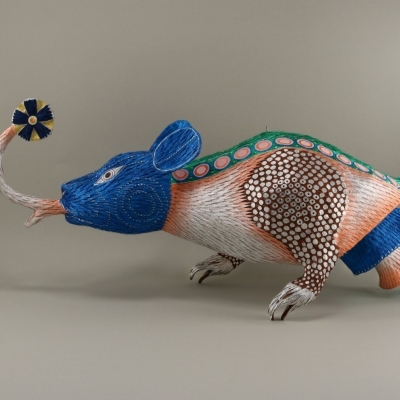 Roberto Benavidez works in the Mexican tradition of cartonería, or papier-mâché. Benavidez grew up in South Texas, and like many Mexican and American children, he grew up with piñatas to mark celebrations. As part of a mixed-heritage family (Benavidez’s father is Mexican and his mother American), Benavidez conveys his sense of a hybrid identity through piñata forms such as Illuminated Piñatas No. 1 and 2, now in MOIFA’s collection, that reference the hybrid creatures that inhabit the margins of illuminated manuscripts. This particular series re-creates creatures from the Luttrell Psalter (ca. 1325-40), housed today in the British Library. Although trained as a sculptor at Pasadena City College, Roberto Benavidez is self-taught as a piñatero (piñata maker) and opted to work in a tradition associated with his Mexican-American roots. On his website, he describes himself in this way: "Half-breed, South Texan, queer, figurative sculptor specializing in the pinata form; playing on themes of race, sexuality, art, sin, humor, ephemerality and beauty." By blending two traditions--the piñata and the illuminated manuscript--Benavidez reconsiders both and at the same time offers paths of innovation