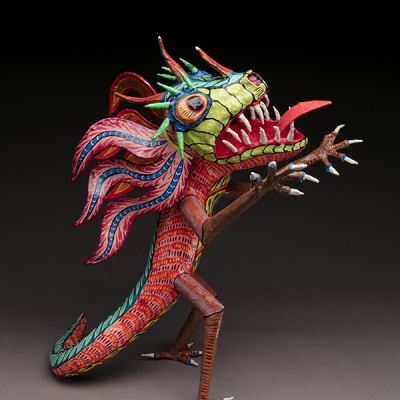 Called cartonería in Mexico, papier-mâché is an integral part of Mexican culture. It uses simple materials of paste, cardboard, and paper evolving from religious purposes to create a diverse array of subjects such as piñatas, dolls, skeletons, toys, and fantastical animals called alebrijes.

Cartonería is used in regional and religious festivals throughout the year in Mexico. Cartoneros, artists who create the papier-mâché sculptures,  organize their production year around the popular fiestas of Carnival in early spring, Holy Week in late spring, Corpus Christi in summer, Día de Muertos in autumn, and Christmas in winter.

The exhibition will feature more than 100 items from the permanent collection, including many objects from the private collection of modernist designer and Santa Fe resident, Alexander Girard, and donations and purchases throughout the history of the museum.

Most of the work included is made in the two most popular areas for the creation of cartonería–the metropolitan area of Mexico City and the city of Celaya in the state of Guanajuato. The Indigenous masks are from the state of Nayarit. The work in this exhibition spans approximately a forty-year period between 1960 and 2000.

The Ballet Folklorico performing ensemble of LNSF, directed by Antonina Valdez-Romp, is dedicated to preserving the traditional dances of Mexico.  The Ballet delivers a vibrant and colorful presentation of traditional and modern movements with quick stomping footwork that defines the dances of Mexico.  A joyful and graceful demonstration of dance, music, and costumes.  LNSF seeks to instill life skills in each participant with a positive role model emphasizing respect, discipline, and cultural tolerance to each student.

Nacha Mendez is pioneering the genre of World Latin music, drawing from the influences of her youth combined with the formal training she received during her world travels. Nacha grew up as Marghreta Cordero in the tiny border town of La Union, in southern New Mexico, where she began singing and playing the guitar at an early age. She learned traditional Ranchera Cancion from her grandmother and performed in border towns near El Paso with her cousins the Black Brothers. Nacha is recipient of the New Mexico Music Commission’s 2018 Platinum Music Award.

She went on to study classical voice and electronic music at New Mexico State University before moving to New York City, where she studied flamenco guitar with Manuel Granados of the Music Conservatory.